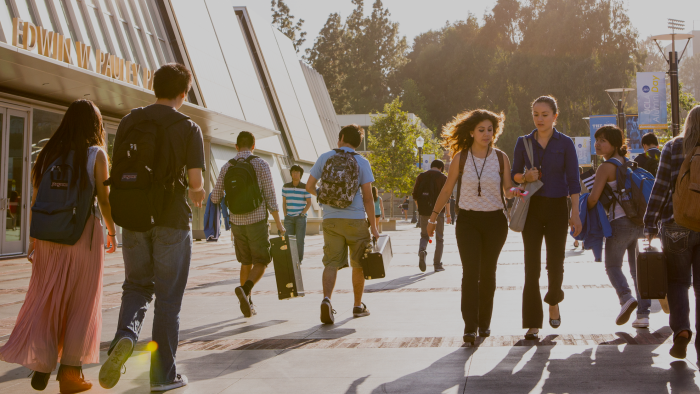 UCLA has a long history of nurturing leaders across a variety of industries and the Blackstone LaunchPad will expand the extent of services available to students. Services like the ones that helped launch Enrou, a company that recently benefitted from the Startup UCLA accelerator and Blackstone LaunchPad program. Enrou won this year’s Forbes Under 30 $400,000 pitch competition and, more recently, was selected as one of 20 venture finalists to compete at Blackstone LaunchPad’s Demo Day in New York City.

Remarks from UCLA and Blackstone:

“UCLA is proud to be partnering with the Blackstone LaunchPad California initiative to advance the emerging entrepreneurial landscape of the region and the state as a whole. As one of the nation’s top research universities, and one with a very public mission, UCLA has a vital role in promoting entrepreneurship in the communities we serve. We look forward to collaborating with our partners in making this initiative a huge success.”

“We are pleased to partner with UCLA to bring Blackstone LaunchPad to Los Angeles,” said Amy Stursberg, Executive Director of the Blackstone Charitable Foundation. “Through the work of Blackstone LaunchPad, we are able to provide local entrepreneurs with the resources and support they need to bring their ideas to market and remain in the Southern California region. These new and innovative companies have the potential to strengthen and create new jobs within their surrounding entrepreneurial ecosystem, and we look forward to seeing them do so.”

What: Blackstone LaunchPad at UCLA Grand Opening & Ribbon-Cutting Ceremony. Student entrepreneurial endeavors will be featured and a live demo of 2014 Forbes Under 30 pitch competition winner, Enrou, will conclude our program.

Who: The event will feature prominent representatives from Blackstone, UCLA, and Silicon Beach. Special guests include:

RSVP: To RSVP or for more information please see media contact, above.

About The Blackstone Charitable Foundation:

The Blackstone Charitable Foundation was founded at the time of Blackstone’s IPO in 2007 with substantial commitments from the Firm’s employees. Influenced by the enterprising heritage of the firm and its founders, The Blackstone Charitable Foundation is directing its resources and applying the intellectual capital of the firm to foster entrepreneurship in areas nationwide and globally. Through its investment expertise across several asset classes and geographies, Blackstone has a unique perspective on the global economy and a heightened understanding of how entrepreneurial activity is often the crucial catalyst in the growth of successful businesses, industries and communities. For more information, see http://www.blackstone.com/foundation.

About The University of California, Los Angeles:

UCLA is California’s largest university, with an enrollment of more than 40,000 undergraduate and graduate students. The UCLA College of Letters and Science and the university’s 11 professional schools feature renowned faculty and offer 337 degree programs and majors. UCLA is a national and international leader in the breadth and quality of its academic, research, health care, cultural, continuing education and athletic programs. Seven alumni and six faculty have been awarded the Nobel Prize. For more information, visitÂ http://www.ucla.edu/